The Winner of the Green Carnation Prize is…

The Green Carnation Prize today (22 May 2017) announced David France’s insider account of the AIDS epidemic, How To Survive A Plague: The Story of How Activists and Scientists Tamed AIDS, as the unanimous winner at a ceremony hosted by Foyles in London, UK.

The third non-fiction winner in the Prize’s seven-year history, France’s book was up against a shortlist that also featured Stella Duffy, Garth Greenwell, Kirsty Logan, and Kei Miller. First released as a film in 2012, How To Survive A Plague was dedicated to France’s partner Doug Gould, who died of AIDS-related pneumonia in 1992, and went on to be nominated for best documentary in 2013 Academy Awards. 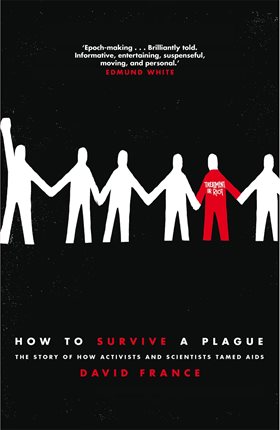 Double Emmy-nominee, France, an investigative reporter and a chronicler of AIDS since the early 1980’s, used his unparalleled access to the community to share the story of the AIDS epidemic and the grassroots movement of activists, many of them facing their own life-or-death struggles, who grabbed the reins of scientific research to help develop the drugs that turned HIV from a mostly fatal infection into a manageable disease.

Chair of judges and internationally acclaimed author John Boyne said: ‘In this time of renewed activism in an increasingly uncertain world, France’s definitive account of the AIDS crisis and the activists who changed the fate of so many lives, seems vital and important to inspire everyone, not just the LGBTQ+ community. We couldn’t be prouder to choose this book as the rightful winner.’

Simon Heafield, Head of Marketing at Foyles, said: ‘I’m so glad to have another excuse to recommend David France’s magnificent book to Foyles readers. This essential and inspirational account of one of the darkest periods of recent history is also a breathtakingly riveting read, full of unforgettable characters. This is arguably one of the most important books published in 2016, and a very deserving winner.’

In addition to his trophy, France also received a bottle of champagne and his winning book will receive national in-store promotion across Foyles bookshops. Now in its seventh year, the Prize, with the support of Foyles, seeks to champion the best writing by an LGBTQ author in the UK. It is a vital recognition and celebration for books as diverse as the community it represents and unified by a common thread: sheer quality of writing.

Simon Savidge, Director of the Prize, said: ‘I am delighted that David France has won The Green Carnation Prize with this incredible and important book. We have made many steps forward in the 50 years since the decriminalisation of homosexuality in the UK, however some of the voices of our history have often been silenced. I hope this book will enlighten people, make them question what they think they know and encourage discussion. That is what every great book does.’

Previous winners have included Patrick Gale, Catherine Hall, and Christopher Fowler. Last year, following the highest number of submissions to date, the Prize was awarded to Marlon James’ A Brief History of Seven Killings. Upon winning the prize, James said: “Six years ago I wouldn’t have been able to voice that I was LGBT, so to be recognised for that and for work the judges felt was great is fantastic.”