Posted on October 1, 2012 by greencarnationprize

After several intense months of reading, the judges spent many hours yesterday and this morning debating and discussing all the submissions for the Green Carnation Prize’s third year. Without further ado we can reveal that the Green Carnation Longlist 2012 is … 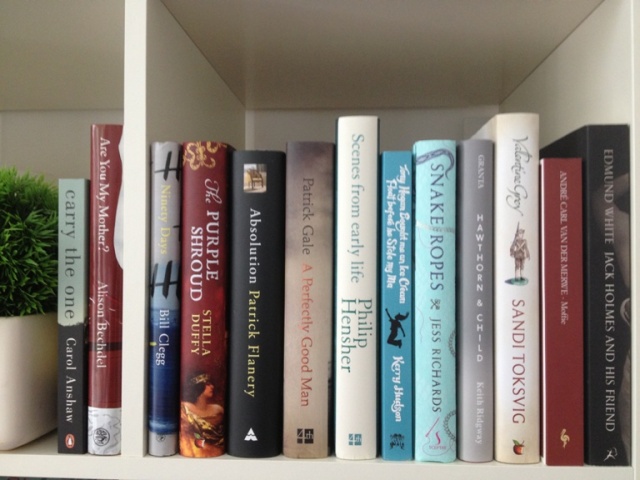 Chair of the judges, Rodney Troubridge, bookseller extraordinaire, who has been in the industry for over twenty years, said “From an intimidating number of submitted books it was a satisfactory feeling to discuss them all and produce a long list we all feel proud of. Now for the next stage…” Fellow judge, and Green Carnation Prize Honorary Director, Simon Savidge who has returned for his third year of judging said “Every year I think experience will make it easier to judge each year, yet with the amount of submissions and with such wonderfully varying books, showing how diverse LGBT writing is, it gets more and more difficult. I do think this year’s longlist is another exceptionally exciting list of books from contemporary novels to historical, graphic novels and fictionalized memoirs though all have themes of confrontation whether its war, family, good vs. bad and even confrontation with ourselves.”

The awards previous winner last year Catherine Hall, who has joined the judging panel this year agreed with its diversity. “Getting to long-list stage of the Green Carnation has been a real delight. The submissions were of such a high standard that they were a joy to read. I hope our long-list reflects their sheer diversity, ranging from the viciousness of life in the South African army to the dilemmas of a country priest in Cornwall, via a 70s Bengali childhood and crack addiction in New York. It’s going to be hard to narrow them down to a shortlist.”

Her thoughts were echoed by two of her fellow judges. Photographer and DJ Dom Agius, said ”Despite some initial nerves at the incredibly high standard of entries, the judges’ final longlist selection was almost totally unified. These thirteen hopefully represent a broad & vivid cross section, not only of contemporary Gay & Lesbian literature but of the modern human condition full stop.” Katie Allen, web editor of The Bookseller and We Love This Book and the judging panels ‘straight eye’, said “Choosing from the many submissions to the Green Carnation Prize to thirteen has been a real struggle. We made plenty of unanimous choices, but also plenty we all debated heavily too. There are some real gems in there and it will be tricky to reduce the list even further…”

It looks like the next meeting for the short list, which will be announced on November the 7th 2012, could be quite the debate.

For more information, interviews with the judges or  a media pack email greencarnationprize@gmail.com